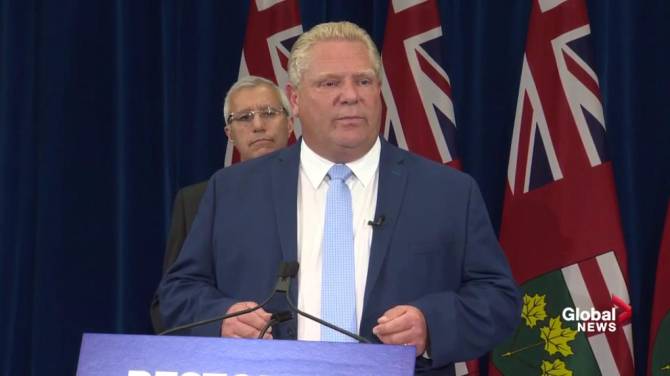 Months after campaigning on a promise to save billions by finding efficiencies without cutting jobs, the Doug Ford government is launching and expanding voluntary exit programs for groups of public service employees.

“As part of the government’s comprehensive plan to address its fiscal challenges, the government is exploring measures to manage its compensation costs in a way that ensures vital services to citizens are not compromised while avoiding involuntary job losses,” a memo sent to employees, and obtained by Global News Wednesday evening, read.

“To help streamline the size of the Ontario Public Service (OPS), the current focus is on leveraging available programs that will allow employees to exit the organization on a voluntary basis. As such, cabinet has approved a time-limited transition exit initiative expansion and a new voluntary exit program within the OPS.”

WATCH: Ontario Premier Doug Ford said Tuesday no job cuts would occur as the result of the commission of inquiry into the province’s finances, saying they will find efficiencies without cutting jobs. (July 17)

The memo said employees in seven different management compensation plans and groups can apply for the new voluntary exit program between Jan. 1 and Feb. 28. The employees would have until Dec. 31, 2019 to leave.

Under the transition exit initiative, a program that has been in place since 2013, it will be expanded to four new employee groups — and not just managers — on Jan. 1 and run until Feb. 28.

It’s unclear how many employees would be eligible to apply under the two programs or what the financial implications would be.

Shortly after being elected in June, Ford announced a hiring freeze with the exception of essential front-line staff while a review of the province’s finances was being undertaken.

On Monday, Ontario’s financial watchdog said the province’s deficit will rise to $12.3 billion this fiscal year.

— With files from Travis Dhanraj and The Canadian Press