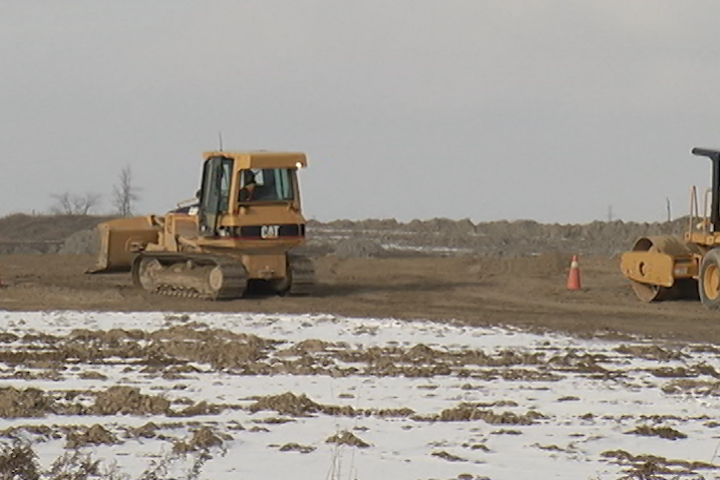 The development at the corner of Highway 35 and Colborne Street in Lindsay, Ont., has been in the works for years and is shaping up to be one of the town’s largest-ever commercial projects, but no one knows yet what the new site will hold.

It has long been speculated that a big box store like Walmart will be its anchor tenant, as the company behind the project, Craft Development Corporation, has opened similar developments in the past.

Before the Oct. 22 election earlier this year, City of Kawartha Lakes Mayor Andy Letham also suggested a Walmart was in the town’s future.

However, some Lindsay residents aren’t thrilled about this possibility.

“We came from Oshawa so we had three of them. They’re OK, but we like the small town, small business person owning the place,” said Heather Peter, a local resident.

“We don’t want them to leave the downtown core because that’s what will happen when you put the big box store out in the far end. All the traffic is going to go out there,” said Peter’s husband, Bill.

In the past, Craft Development has worked with larger retail chains such as Loblaws, Walmart and Shoppers Drug Mart.

“We’ve been in discussion with two or three of the larger retailers but we have not confirmed anyone at this time,” said Nigro.

The development will be the latest construction project in Lindsay’s already booming west end.

“Nobody that lives on Colborne will be able to be able to get out of their street,” said Doug Bagshaw, another local resident.

Moving forward, Nigro says the next steps for the project will take place in early 2019.

“We’ll have an actual public meeting sometime in February where council votes on the plan of subdivision and our site plan with regards to retail. They’ll be looking at how it intertwines, how everything works, the pedestrian links, the bicycle paths, benches, the landscaping,” said Nigro.

Construction at the site is already underway, but once all the approvals are in place, Craft Development hopes to see the construction ramp up in spring.

The project will take at least three years to complete and is expected to create more than 400 new jobs for the region.