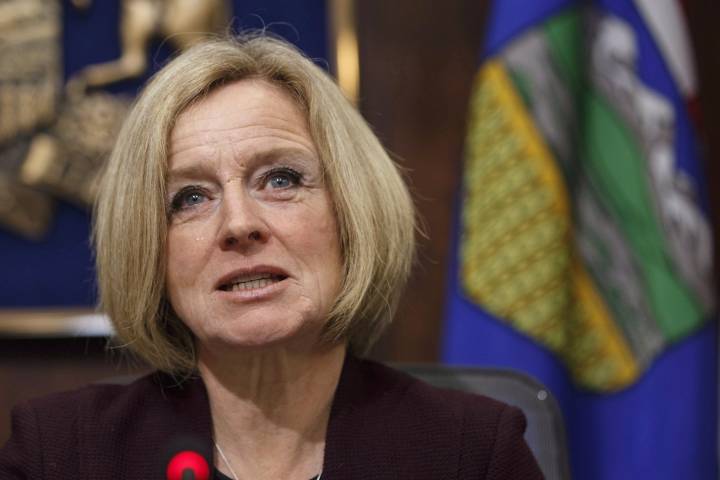 “I know that the opposition wants to sort of revel in what they insist on hoping is defeat, but we’ve made more progress on getting a pipeline to tidewater than any other government has in the last 70 years,” Notley told The Canadian Press in a year-end interview.

Notley will take voters to the polls in the spring after a 2018 that saw her tightly wrapped in the Gordian knot of the Trans Mountain pipeline expansion. It received a green light two years ago and would triple the amount of oil moving to the B.C. coast and from there overseas where it could fetch a better price.

Notley, while fighting court challenges and the B.C. government over the project, pulled it back from the abyss after the pipeline’s owner started questioning whether it would ever get built. She got the federal government to buy it for $4.5 billion

No sooner had the champagne corks popped than the Federal Court of Appeal ruled in the fall that Ottawa hadn’t properly consulted with First Nation or examined the impact on marine life.

The project is in limbo until those failings are addressed.

“(The court ruling) means it has slowed down, but it is still alive and I think it is going to get done,” said Notley.

The line has come to symbolize not only Alberta’s struggles to get resources to market but also frustration over a stubbornly slow rebound in the oil-based economy.

There have been pro-pipeline demonstrations in recent weeks along with renewed fringe commentary for Alberta to leave Confederation.

Notley has taken to sniping at Quebec for criticizing Alberta’s “dirty energy” and has joined critics who say Prime Minister Justin Trudeau’s federal government has failed — offering sympathy but little else — to sustain one of the core drivers of the national economy.

Political analysts and recent opinion polls suggest Notley remains popular. But Jason Kenney and his United Conservatives will pick up the fight when the election is held, by law, sometime in March, April or May.

Kenney suggests Notley is the author of her own misfortune by bringing in a carbon tax and working with Trudeau, who is making it harder to get approval for energy megaprojects.

“I can understand perhaps why they tried to make it (work with Trudeau) but it has been a complete failure,” said Kenney in an interview.

“Even the premier now seems to acknowledge that through the change in her tone. Too little, too late.”

Kenney has a more combative approach and has promised to take the federal government to court over its carbon tax plan.

Polls and political observers say the dominant election issues will be the economy, jobs, and who can help put food on the table.

“If we had an election today, we’d have an overwhelming UCP majority,” said Calgary-based pollster Janet Brown.

“Albertans are singularly focused on the economy and what’s necessary to get the economy moving. At this moment in time, they think Jason Kenney and the UCP would be more competent at managing those things.”

The NDP has already signalled its attack lines by warning that a Kenney government would gut departmental budgets and threaten hard-won gains for women and the LGBTQ community.

Brown said United Conservative numbers have remained strong since the party was formed in 2017 in a merger of the Wildrose and Progressive Conservative parties. So far, NDP attacks have not resonated.

“They keep trying to throw stuff at Jason Kenney, trying to paint him as anti-LGBTQ, a bigot, a racist all sorts of things. My polling numbers just don’t suggest that any of that stuff is sticking. I’m just impressed not just where that UCP number is, but how unchanging it is.”

Calgary political scientist Duane Bratt said Alberta may statistically be out of a recession but that’s not how people feel.

“And when times are bad, you lash out at the incumbent government. That’s a simple fact.”

Fighting hard to come up the middle is the Alberta Party under new leader and former Edmonton mayor Stephen Mandel.

The party has long been a small-time player. It elected just one member in 2015 but added two more in floor-crossings. But it already has more than 50 candidates and expects to soon fill the full slate of 87.

Mandel said the Alberta Party is the perfect middle-ground choice, because it combines the United Conservatives’ fiscal conservatism with the NDP’s socially progressive outlook.

“People don’t like the polarization of the province,” he said. “They want to see more balance.”

If a vote were held as early as the first week of March, a writ could be dropped as early as February. Political scientist Chaldeans Mensah said that’s when voters will really get engaged and fortunes could change quickly.

“Right now the UCP is looking good, but I think it’s too early to conclude that the election is over,” said Mensah of MacEwan University in Edmonton.

“The campaign and its dynamics will really tell the tale.”