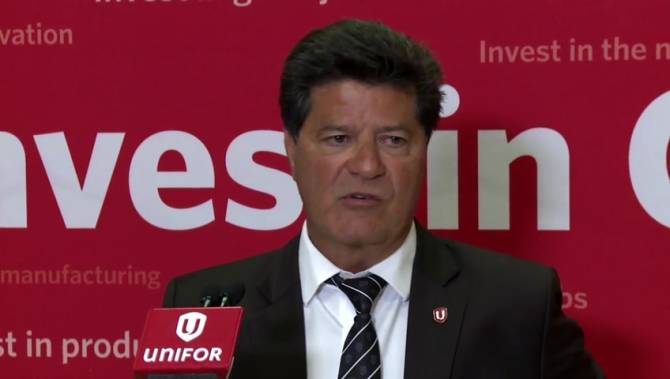 OSHAWA, Ont. – Unionized workers at the General Motors assembly plant in Oshawa, Ont., staged a second work-stoppage after the company confirmed it would not reconsider plans to close the facility.

Unifor said the protest Wednesday morning lasted close to two hours before it ended and followed about a five-hour sit-down at the plant the evening before.

The labour action came after union president Jerry Dias sat down with GM on Tuesday to talk about proposals the union had made to extend the life of the Ontario plant, but came away empty-handed.

The union has emphasized the wider economic impacts of the shut-down and released a study Wednesday putting some hard numbers to the claims.

“We’re looking at tens of thousands of jobs and a direct hit to the GDP,” said Unifor president Jerry Dias in a statement.

“Should GM proceed with plans to close Oshawa, the economic impact would be substantial, both in the short and long term.”

The economic analysis estimates the closure of the plant by the end of the year will result in 14,000 fewer jobs in Ontario and 10,000 fewer jobs outside the province by 2025, compared with keeping the assembly plant open.

Those would include 4,400 jobs at GM Oshawa and its parts suppliers in Ontario that would be lost in 2020 as well as lost direct and indirect opportunities from keeping the assembly plant open for an additional five years.

The closure would also cut Ontario’s GDP by $5 billion and mean $330 million less provincial government revenue next year, and lead by 2030 to about a billion dollars less in combined provincial and federal revenues, the study estimates.

The company has said the options suggested by the union, including extending the life of the Chevy Impala and Cadillac XTS produced at the plant or shifting production slated for Mexico to the plant, are not economically viable.

GM acknowledged the frustration that led to the work stoppages, but urged the union to instead work with the company on timing and transition plans for the approximately 2,600 unionized workers who are losing their jobs.

“We understand our union’s frustration but need to now work together to deliver supports, transition and training for our employees for new opportunities over the coming year,” spokeswoman Jennifer Wright wrote in an email.

GM said it has identified job opportunities, is willing to pay for retraining and is open to negotiations on packages for workers on top of what is already included in contracts.

Unifor has refused to consider negotiations on a shut-down of Oshawa. The union has planned a rally in Windsor, Ont. Friday to coincide with a GM investor update.