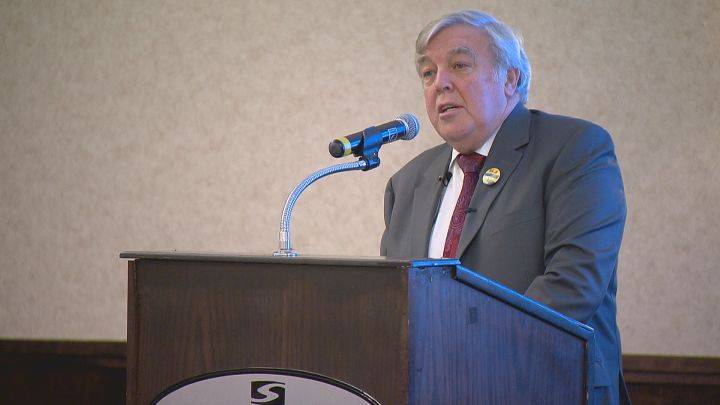 By admin
in
Chamber Of Commerce
Chris Spearman
City of Lethbridge
Lethbridge
Mayor Spearman
Politics
Spearman
State Of The City
State of the City Address
Jan 15, 2019

For the fourth time in his tenure as Lethbridge Mayor, Chris Spearman delivered a state of the city address on Tuesday. In front of a large audience at the Sandman Hotel, Spearman touched on a number of topics from 2018, while also looking ahead to what the community can expect this year.

READ MORE: A look at how the City of Lethbridge maintains buildings

Lethbridge was plagued by a drug crisis in 2018, and Spearman believes it posed challenging health and social issues at the municipal level.

“It’s increasingly complex,” Spearman said. “The supports are long overdue and the challenge for us now is how to deal with it until those facilities are built and the programs are implemented. So we will still have challenges for the next 18 months to two years, but we certainly will work with community partners to try to address them in the short term.”

Spearman added that another challenge the city is facing in 2019 is job creation.

A number of major projects are coming to a close, including the Destination Project at the University of Lethbridge, the leisure centre at the ATB Centre and the Cavendish Farms project.

“How do we continue to employ people who have very good skills? One way is to encourage expansion of existing industries and businesses, another is to attract new businesses and industries to the area,” Spearman said. “But certainly we’ve got our work cut out for us to make sure that we continue to maintain a viable economy and we keep those skills here in the city.”

“Some of these projects that are going to wrap up and be complete are going to be hiring staff,” Kruger said. “In some cases, we’re going to be seeing people move into our city to fill those vacancies. We’re going to have increased diversity utilizing those resources that we’re able to have in our community.”

Some of the projects Lethbridge will see in 2019 include the twinning of University Drive, a new fire station coming to the west side of the city and the grand re-opening of the Yates Theatre.

In closing his speech Tuesday, Spearman urged the community to engage in respectful dialogue, especially online.

“Social media and other forms of public comment that are anonymous, bring out the worst in people. It’s easy to comment when you don’t have solutions. When we are elected we have to come up with solutions and we have to be accountable for our decisions.”