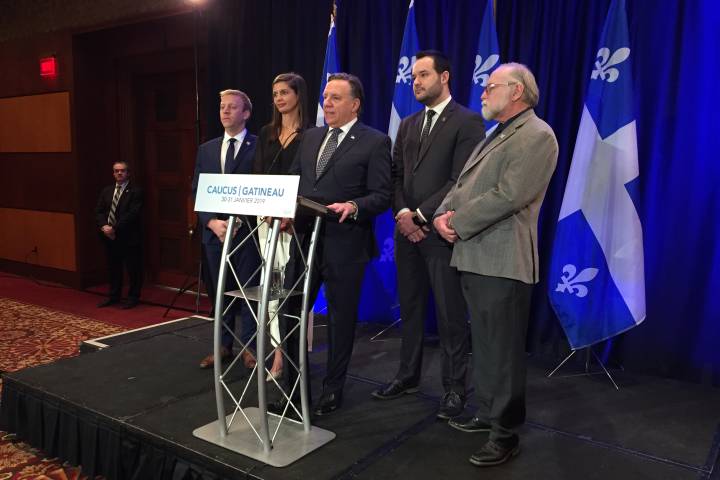 The Coalition Avenir Québec (CAQ) government is in Gatineau on Wednesday and Thursday for a caucus retreat before the new legislative session begins next week.

The government says it will table its highly contentious secularism bill as early as next month, but the caucus does not agree on whether to include a grandfather clause in the bill which would allow employees, namely teachers who currently wear religious symbols, to keep their jobs.

“It’s not black and white. There are good arguments for both positions, so that’s why I want to listen to our 75 MNAs to see where the population is on this point,” Legault said.

“We were clear during the electoral campaign; we will ban religious signs for four groups of people. That won’t change,” Legault added.

Those groups of public employees in positions of authority are judges, prosecutors, police and prison guards, as well as teachers. The premier said the government will go as far as using the notwithstanding clause — with or without reaching a consensus with the other parties at the National Assembly.

However, Simon Jolin-Barrette, the CAQ house leader and minister responsible for the new secularism bill, said he is open to discussion with the other parties.

“The premier was clear with me. He wants to end the discussion about that subject,” Jolin-Barrette said.

The Parti Québécois (PQ) would like to see the CAQ government implement a grandfather clause to prevent employees who currently wear religious symbols losing their jobs. MNAs in Gatineau admitted this would create debate within the caucus, even though most of them refused to comment how they personally stand on the issue.

Iberville MNA Claire Samson says she will represent her constituents during the private caucus meeting.

“They feel that we’ve taken the religion out of the schools 50 years ago and it’s not its place,” she said.

However, her own stance on the issue isn’t nearly as strong.

“Personally, I’ve been raised by the nuns all my life and that didn’t make me a more religious person than the guy next door,” she explained.

The premier said he knows not everyone will be happy with the final bill, but that it is “a great compromise.”

“If we say these are the rules, this is the framework, it will prevent extremists, racists to ask for the ban of religious signs everywhere in Quebec,” Legault said.