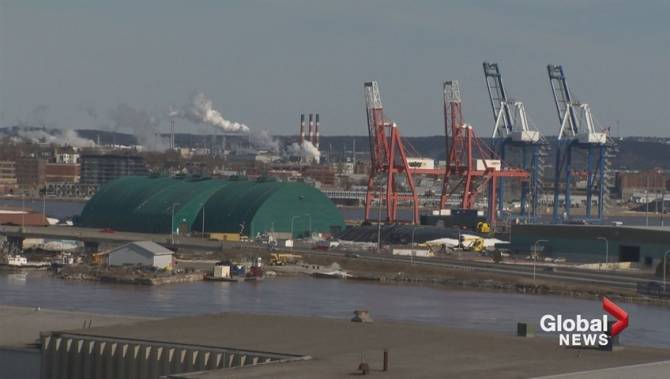 It takes a village: Inside the effort to save the town of McAdam, N.B. – New Brunswick

“We started out as a logging town and then it grew into a rail centre with the CPR. At the height of the CPR there was probably about 600 people working in this areas for the Canadian Pacific Railroad,” he said.

“Then the diesel engines came in in the 1960s, late 1960s, and those put an end to a lot of the work that was being done by the railroad guys … so there was quite a downturn in the community and the population at that time and it kept on until probably I would say two years ago.”

McAdam now has a population of about 1,150. Like many small towns in the Maritimes people have gradually left McAdam, following jobs out west.

When Stannix returned to McAdam after a career in the military took him across the country, he was worried by what he saw. Now, serving as mayor, he’s on the front lines trying to turn it around.

“I moved back to McAdam in 2012 and one of the first things I did was I went to the mayor, Frank Carroll, at that time and said I see a village in decline, what are we going to do to turn it around? And he said, ‘Well, let’s put out heads together and we’ll think about it,” he said.

Out of that public meeting came the McAdam Community Action Group, which took ideas that came out of the public meeting and tried to develop them. Stannix says they tried to focus on three aspects that would turn the tide: industry, tourism, and retirement.

With a strong industry presence and approximately 30,000 visitors a year, the village went about selling themselves to retirees. With cheap housing and the ability to offer a slow country pace houses began to sell.

“As those houses started selling we started hearing more and more people coming and saying, ‘Well is there land for sale? I’d like to buy a building lot,’ and they were pretty hard to come by,” he said.

“We found an area where we had some building lots that were available and had not sold and we decided why don’t we get a hold of those lots, turn around, sell them for a dollar and we’ll entice people to move to the community.”

WATCH: Saint John Growth Committee hears from Halifax is it tries to turn population decline around

The idea gained the village a lot of attention and very quickly they received almost 600 inquiries about the lots. Stannix says they then took the first 200 and began going down the list offering the chance to pick one of the wooded lots. Eleven of the available 16 are now spoken for.

“Right now we’re down to about 86 people and out of those 86, 11 have chosen to accept the the legal paperwork, so they’re looking at that, selecting lots, getting the legal work done,” Stannix said.

Stannix says 62 houses have sold in the last two years and estimates that the population is up by almost 100 people to about 1250. Those in the community have welcomed the influx of new people.

“I mean we’ve got a small community we need to keep our schools and health centre running and the more people the less chance that they’ll be shut down,” said former councillor John Kilbride.

“Our doors are always open in McAdam, come knocking.”

Two years ago the school board began thinking about closing the community’s elementary school, but the village banded together and fought to keep it open. Stannix says enrollment is up at both the elementary and the high school.

As the village tries to find it’s way forward and attract those fleeing the exorbitant housing prices of the country’s major urban centres, those in the community recognize that new blood can only be good for the continued health of McAdam.

“Those people have come with new ideas, new energy, which has further increased the growth of the village and the vibrancy of the village, which is the most important thing that these people bring,” Stannix said.

“A lot of people think it’s just about number and it’s the money that they bring to the community and I look at it from the perspective of they bring energy and ideas. That’s worth more than money to me.’