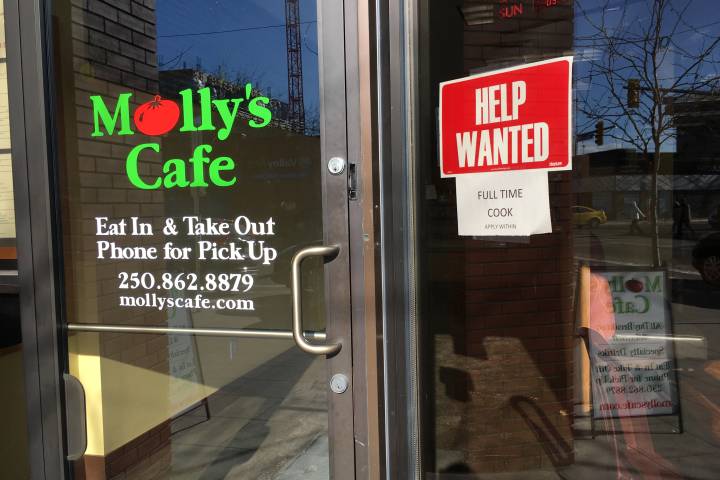 If you think you’re seeing more ‘Help Wanted’ signs around the Okanagan, you’re not imagining it.

There are many jobs up for grabs these days across the valley, making it challenging for employers to hire staff.

“It’s been difficult trying to find the right people,” said Mike Ingram, the owner of Molly’s Café in downtown Kelowna.

The unemployment rate in the Thompson-Okanagan region is the lowest it’s been since the summer of 2015.

According to the latest data from Statistics Canada, the jobless rate was at just 4.7 per cent in December.

While it’s an indicator of a strong economy, the dip in the unemployment rate has employers scrambling to fill job positions.

“Yeah for sure, and we’re not even into summer yet, with the tourists coming, stuff like that, so it’s a bit of grind,” Ingram said.

Some employers brought their search to Okanagan College on Wednesday at its annual job fair, where all 60 companies taking part were recruiting employees for skilled and non-skilled work.

Giesbrecht said those positions have been tough to fill for the finance-related business.

“There is some particular competencies that either aren’t available in Kelowna or there’s just not enough. And as a company that’s really, really growing, we can’t hire enough of these people fast enough,” she said. “And so we’ve had to start looking at other communities.”

The dean at the school of business at Okanagan College told Global News that the job vacancies are allowing more graduating students to stay in the Okanagan.

“One of the things that we have seen in the last couple of years in particular, students are telling us that they are finding jobs here and that they can come here, graduate and stay here,” Bill Gillett said. “Almost every one of our graduates that is looking for a job here in the Okanagan is finding one of more.”

Gillett said some of the sectors with high vacancies include hospitality, finance and human resources, as well as some others.