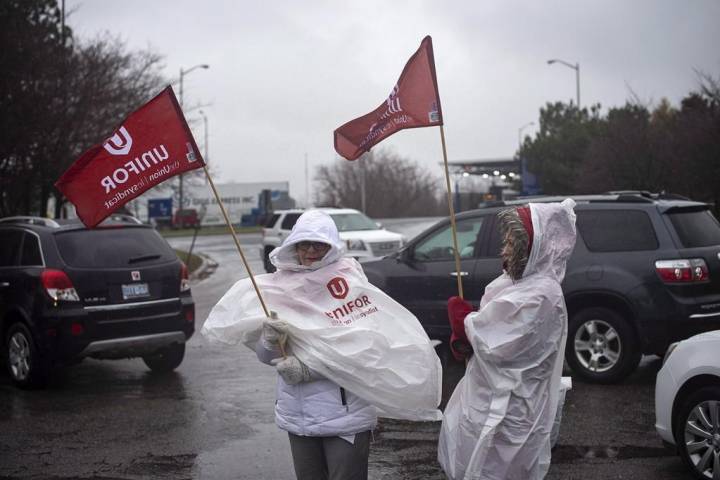 TORONTO – The Ontario Labour Relations Board has ruled that members of Unifor engaged in unlawful strikes in their efforts to protest the planned closure of the General Motors assembly plant in Oshawa, Ont.

The ruling, dated Feb. 22 and posted by Unifor late Monday, orders the union and its members including president Jerry Dias to cease and desist from engaging in, authorizing or counselling unlawful strikes.

General Motors Canada asked the board earlier in February to stop “any further illegal activities” after several job actions by Unifor members following the news that the Oshawa plant would close later this year.

The union argued in its filing to the board that it hadn’t violated the law and that the cited incidents were discrete and resolved quickly.

GM’s allegations focused on several incidents where union members halted work or engaged in demonstrations, including on Nov. 26 when the company announced the closure and on Jan. 9 when it confirmed it wouldn’t reconsider its decision.

The board’s order raises the stakes in the ongoing labour dispute because GM can file it in courts to make the decision effectively a court decision, said David Doorey, a professor of labour law at York University.

“The effect of that is that future illegal strikes could be treated as a contempt of court, which could lead to fines or even imprisonment, although that is rare nowadays,” he said by email.

In issuing the cease and desist order, the board recognized the possibility of more strikes ahead in the ongoing protest against GM, said Doorey.

He said Unifor engaged in civil disobedience to fight back, noting that workers have a long history of pushing against legal rules that seek to restrain worker militancy.

Unifor has been fighting against the closure of the plant, slated for the end of the year, that would put 2,600 unionized workers at the operation out of a job. The union has also said thousands more workers in parts plants and other indirect jobs at other locations that could be hit by the closure.

The labour board ruling also covers actions by employees at auto parts suppliers Inteva and Lear, who temporarily walked off the job in separate actions protesting the GM Oshawa closure.

The union has said it is also exploring legal options to prevent the closure, arguing that GM is in violation of an agreement to not close any plants until September 2020.