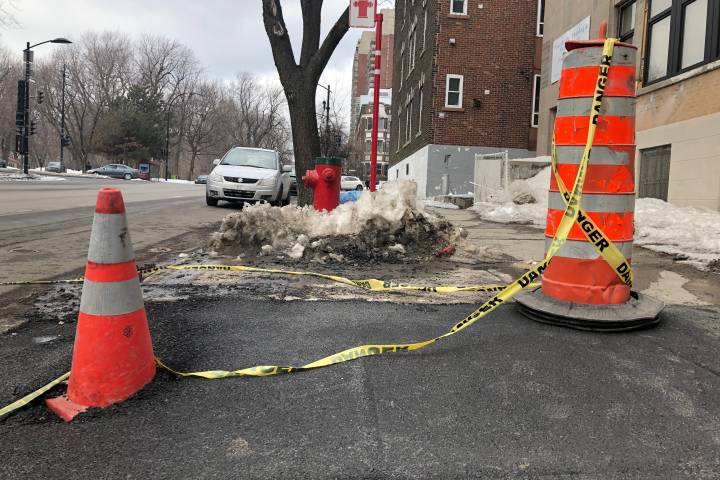 It’s no secret that this winter has been very tough on Montreal’s streets and sidewalks, but one particular stretch of sidewalk east of downtown is being heavily criticized for an out-of-the-ordinary paving job.

Near the corner of Papineau Avenue and Sherbrooke Street, a stretch of the sidewalk has been covered in asphalt and decked out with three orange cones. One of the cones has been paved right into the surface of the sidewalk.

“It’s so characteristic of Montreal — cone city,” said Tavish Kincaid, who came across the scene on Thursday. “I stumbled across it and I just thought, ‘This is ridiculous.’”

Kincaid shared an image of the scene on social media with F**k No MTL, a popular Instagram account.

“I got a couple of messages since then of people being like ‘What in the world is this?’ and ‘Where is it?’ A lot of people asked where it is; I think they wanted to go see it,” he explained.

A spokesperson for the administration of Montreal Mayor Valérie Plante explained to Global News that the paving job is a temporary fix for a pipe issue that cannot be permanently repaired during the winter months. The spokesperson added that the cone is there for safety reasons.

Back in 2017, under the Coderre administration, a city crew paved around a parked car.

The city defended the move back then, and it doesn’t seem workers were in the wrong with this temporary fix, either.

“I think they should leave it, to be honest,” said Kincaid. “They should keep it as an art piece.”

Though it is, perhaps, not everyone’s idea of modern art, it seems for now that the cone will remain a part of the landscape on Papineau.