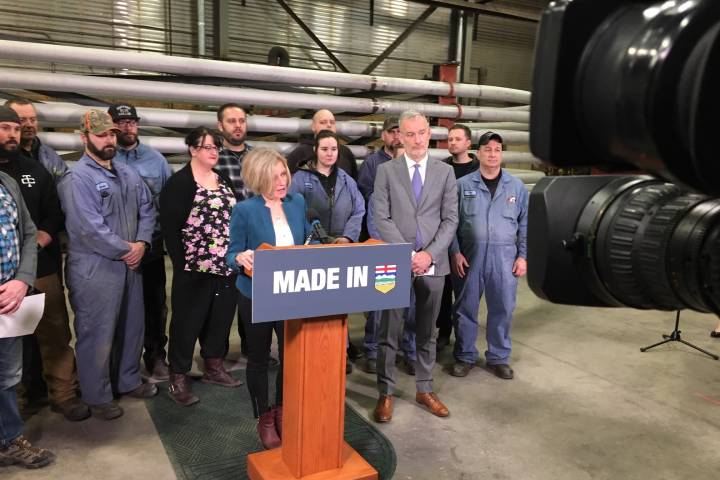 Although the province has 3,800 more jobs than it did last month, the trend factors in the creation of 11,500 public-sector jobs and the loss of 7,000 private-sector positions.

Calgary’s unemployment rate is now the highest among Canadian cities at 7.6 per cent, while Edmonton’s sits at seven per cent.

Notley, who was in Calgary on Friday to announce a $600-million private investment from Inter Pipeline Ltd. to build a petrochemical upgrading facility, said her government plans to continue to attract investments in the province through its Made in Alberta incentive program.

“We’re going to continue to do stuff like this,” Notley said. “To generate more employment, to invest in infrastructure and to continue to fight to get the pipeline to tidewater.”

In the last two weeks, the UCP has announced a job creation tax cut for employers to incentivize hiring as well as a promise to cut the corporate tax rate from 12 per cent to eight per cent.

But the StatCan figures don’t reflect the large number of unemployed Albertans who have exhausted their employment insurance.

Some estimate the number of unemployed engineers alone in the province is in the thousands.

“For some families, that might be the only paycheque — or the last paycheque — and for others, it’s cutting their family revenue in half so in all cases, it makes it hard for survival for Albertans, and it’s a sign Alberta is on the wrong track,” McIver added.

It’s a reality that Tony Pillo knows all too well.

Pillo is an engineer with 25 years of experience; he used to manage long-term asset development for a Calgary oil and gas company.

He was laid off in 2014, along with many other engineers in his field.

“Just that idea of being let go is a very difficult thing; it takes time to get over it,” Pillo said.

But the father of two decided to take a different route than many of his colleagues — he decided to go back to school and complete his MBA.

“After a while, it became obvious that things were going to be quite challenging in Calgary so I took the additional step of going back to school, I pursued my MBA as a way to open up new doors and move into different types of work,” he said.

Pillo admitted he feels lucky, as many of his former colleagues went through financial turmoil and the uncertainty of unemployment.

He said many engineers who were let go during the downturn explored different options like finding a lower-paying job, employment in other fields in which engineering skills would also apply and changing careers to a job that isn’t within the engineering field.

Although the unemployment rate in the province is on par with the end of 2015, Pillo remains optimistic.

“Hopefully, there will be some diversification and there will be opportunities for engineers that are beyond simply in oil and gas,” he said.

The government returns to the legislature on March 18 for a speech from the throne.

By law, the next provincial election must take place before May 31.