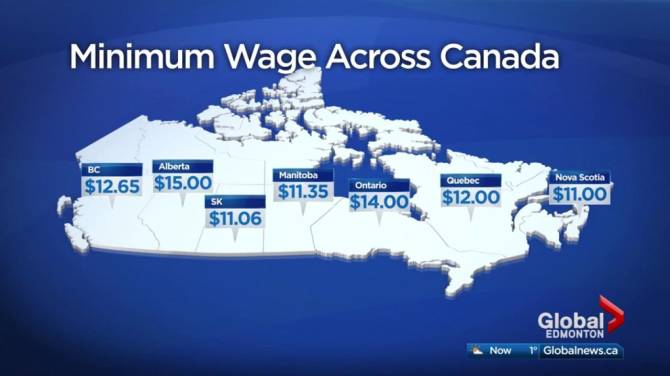 Alberta Opposition Leader Jason Kenney says a government led by him after a spring election would cut the minimum wage for young workers to create more jobs.

Kenney says the United Conservatives would roll back Alberta’s $15-an-hour minimum wage to $13 an hour for those 17 or younger.

He says the current $15 across-the-board wage is curtailing hiring.

“The first job that young people (and) teenagers have gives them a big boost for the rest of their life in terms of employment prospects,” Kenney told a news conference Friday.

“By incentiving employers to hire more young people, we will get younger Albertans back to work.”

Over the last four years, Premier Rachel Notley’s government gradually increased the minimum wage to $15 an hour — the highest in Canada — from $10.20 hourly.

The New Democrats say the rate is a living wage for workers, boosts the economy because earnings are reinvested and helps employers because there is less staff turnover.

Watch below: Alberta’s minimum wage went up to $15 an hour in October 2018

The NDP also removed a wage differential for alcohol servers, who were paid less than the minimum wage on the grounds they made up that difference in tips.

Kenney said the UCP would bring in the wage cut right away and would appoint experts to advise on issues such as bringing back the wage differential.

He has said alcohol servers he has talked to would gladly swap a wage cut if that would lead to more working hours because they could make up the difference, and more, in tips.

“That is not the way we treat working people and we will fight to make sure that that never happens,” she said.

“Work is work, and you don’t change how you value that work by judging who is or is not modest human capital.

“Mr. Kenney’s attack on young people and his desire to roll back the minimum wage reveals very clearly who he is prepared to stand up for. It speaks, frankly, not only to issues of fairness, but to character.”

Kenney promised changes on a range of labour rules, including how holiday pay is calculated and earned.

A UCP government would also make changes to union rules, including restoring a mandatory secret ballot for union certification votes and reversing a ban on replacement workers in the private sector, he said.

A Kenney government would keep mandated leave for reasons such as bereavement, long-term illness, and death or disappearance of a child.

Notley is expected to call the election soon. By law, the vote must be held by the end of May.

With files from Lauren Krugel, The Canadian Press.