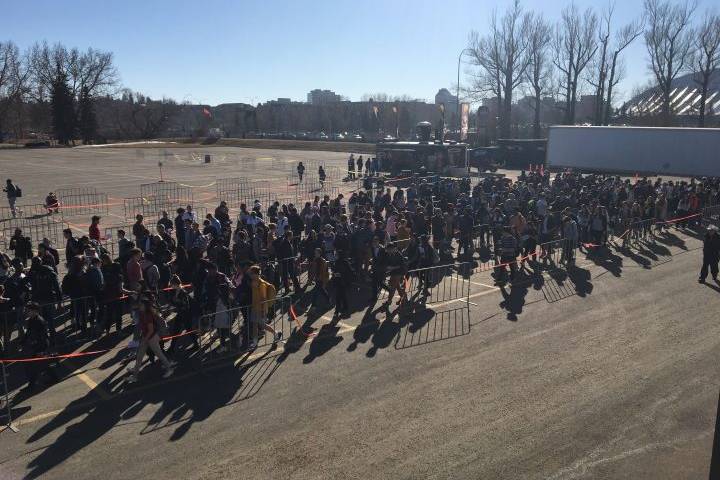 With resumes in hand, and some dressed for success, more than 5,000 eager Calgary youths — between the ages of 15 and 24 years old — braved long lineups for the chance at a job Wednesday afternoon.

The 21st annual Youth Hiring Fair is put on the by City of Calgary’s Youth Employment Centre (YEC) as a way to connect young job seekers with dozens of prospective employers.

Eighteen-year-old Juliana Mclean was the very first in the lineup, getting to the event three-and-a-half hours before it started.

“I thought the earlier, the better,” Mclean said. “Because it gets very busy and by 11, there were lots of people here.”

Statistics Canada reported in February that the overall unadjusted unemployment rate rang in at 7.3 per cent. For youths, aged 15 to 24, that number jumped to 11.2 per cent.

Mclean said getting hired is definitely a challenge these days.

“Months and months of job interviews,” she said. “[It’s] very non-hiring these days in a lot of places.”

Still the mood was an optimistic one — both outside the hiring fair and inside.

Susan Yuen is the community relations liaison with the YEC.

She said the number of employers that also turned out is encouraging, proving they’re serious about hiring.

“This year, we have over 80 employers registered and actually we sold out in December,” Yuen said. “So [there is] a lot of interest in hiring this demographic of 15-24.”

Employers included big national companies such as McDonald’s, Wal-Mart and Costco, to local companies and attractions such as the Calgary Stampede and WinSport.

Most agreed they already get a lot of applications but added that these types of events help get their name and reputation out into the community.

Mclean ended up getting two interviews on the spot, and has three more already lined up.