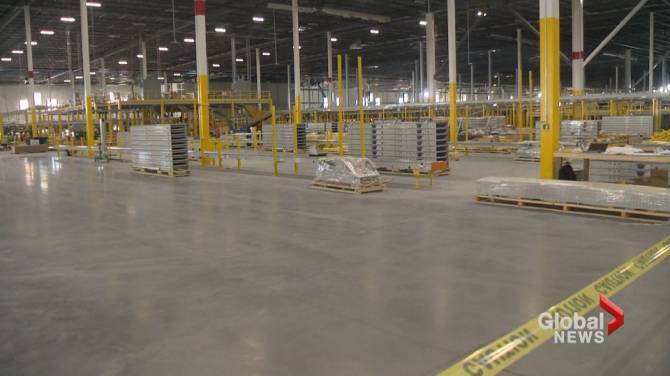 Amazon announces 2nd fulfillment centre in Alberta, this one outside Edmonton

Amazon announced Monday it will open a new customer fulfillment centre in Leduc County which the company says will create more than 600 full-time jobs.

This will be Amazon’s second fulfillment facility in Alberta. The first is in Rocky View County and employs about 1,500 full-time associates. The Leduc centre will be Amazon’s 11th in Canada.

“This announcement by Amazon is another vote of confidence in the Edmonton region as an economic hub in Alberta,” said Amarjeet Sohi, MP for Edmonton Mill Woods and minister of Natural Resources. “The new centre will spark economic activity and create good-paying jobs in our region. I look forward to construction beginning next year.”

The one-million-square-foot facility will be ready by 2020, the company said.

“Our ability to create over 600 good-paying jobs with great benefits is thanks to the network of support we’ve received and the skilled workforce in the region,” said Glenn Sommerville, director of Amazon operations in Canada.

“We’re grateful for the welcome we’ve received from government and community leaders and excited by our growth in Alberta and ability to better serve our customers.”

Watch: Global reporter Tony Tighe toured the new Amazon distribution centre in Balzac and found the materials and the technology in the building are staggering. (Jun 12, 2018)

Amazon promises full-time workers “competitive hourly wages, medical, vision and dental coverage, RRSP contribution matching, stock awards and performance-based bonuses,” the company said in a news release. It also has a Career Choice program, where Amazon pays up to 95 per cent of tuition for courses related to in-demand fields.

The mayor of Leduc County is welcoming Amazon with open arms.

“We couldn’t be more proud that Amazon has selected Leduc County as the location of its newest fulfillment centre in Canada,” Mayor Tanni Doblanko said.

“Amazon’s expansion will create well-paying, stable jobs for our citizens and help diversify and strengthen our local economy, the long-term sustainability of our region and our community at large. Leduc County is an ideal location for world-class businesses to set up or expand their operations, as evidenced by the fact Fortune 500 companies such as Amazon want to invest here.”

Edmonton’s mayor also sees the Amazon centre as a positive sign for the region. Don Iveson said the expansion will create more local jobs and contribute to the local economy.