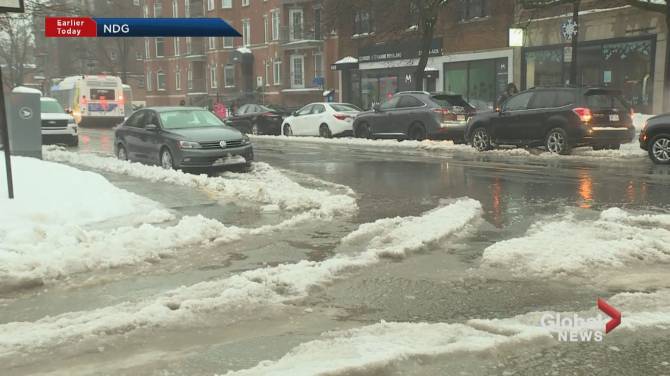 The City of Montreal is shortstaffed as workers race against the clock to clear large amounts of slush and water before temperatures plummet over night once again.

The rapidly changing weather conditions are complicating the city’s job of clearing streets.

The city wasn’t done removing the remnants of the weekend storm when another blast of winter weather struck on Wednesday night. The temperature began to rise and the snow turned change to rain, causing streets and roadways to flood.

“What makes it complicated for the city at this point is having to deal with two different operations,” Montreal Mayor Valérie Plante told reporters.

Plante explained the city had to spread its resources between snow loading and clearing sidewalks and streets before the water freezes over.

Temperatures are expected to hit a low of -11 C Friday morning.

The city says it believes there are enough resources to do a big part of the job, but not all of it.

Work crews are focusing on the city’s main roads and sidewalks.

The city is asking Montrealers to be patient and careful on the roads.